Not all led their team to state titles, but whether on the mound or in the batter’s box, they performed at an extremely high level all season for their teams.

Here’s a look at the 2022 Deseret News baseball Players of the Year.

Riverton’s Sam Beck gets Bingham runner Luke Leatherwood out at second but allows batter Dallin Martinez to make it safely to first in a 6A baseball playoff game at Miller Park in Provo on Tuesday, May 24, 2022.

6A Player of the Year

Sam Beck’s season was anything but routine this season for Riverton, which is what makes his performance all the more impressive as he led Riverton to its first baseball state title in school history.

Beck had Tommy John surgery back in October, and because of his commitment to rehab throughout the winter he was cleared to hit at the start of the season. He was eventually cleared to play shortstop by the start of region play.

“Sam is one of the most competitive players to wear a baseball uniform here at Riverton. He practices the same way he plays in the games 100% all the time. His effort in rehabilitating was very impressive,” said Riverton coach Jay Applegate.

He finished the season with a .398 batting average, a .469 on-base percentage to go along with his 18 extra-base hits and 37 RBIs.

The weekend before the state tournament Beck was in the hospital for what turned out to be a punctured stomach — tests determined the puncture missed his intestines by a couple millimeters. Beck, a BYU commit, missed a few practices, but played in every playoff game and only made one error in 38 opportunities defensively. He also recorded a hit in seven of nine playoff games despite the stomach pain.

“Sam was one of the leaders on this team and has left a great legacy behind. He will be missed but we are excited to see what the future holds for him,” said Applegate. 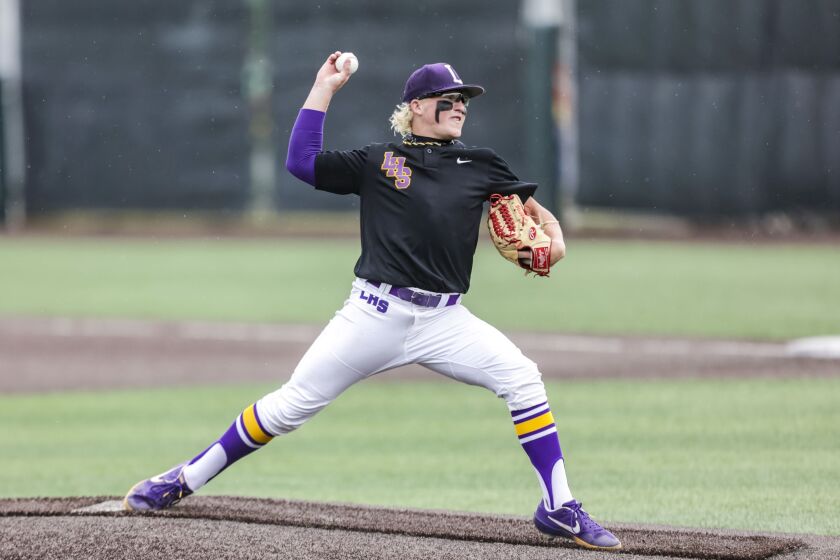 Olympus and Lehi compete in the second game of 5A baseball championships at UCCU Ballpark in Orem, Utah on Saturday, May 28, 2022. Lehi won 4-3.

5A Player of the Year

Maddux Madsen made sure his one season in Lehi purple was a memorable one.

The two-sport athlete transferred from American Fork to Lehi in the winter and then proceeded to lead the Pioneers to their first baseball state championship since 1981.

“In the short time Maddux was in our program his impact was huge and a big part of our championship run. Maddux’s leadership elevated every player in our program from Day 1. He makes everyone around him better to me that was as valuable as the things he did as an individual to help us win,” said Lehi coach Jason Ingersoll.

Madsen got the job done on both the mound and the batter’s box.

As a pitcher, he posted an 8-2 record in 591⁄3 innings pitched with 74 strikeouts and a 3.42 ERA. When he wasn’t pitching he played catcher, and in the state championship picked off a runner at third base in perhaps the most important play of the game.

At the plate, he was just as important, finishing with a .455 batting average and a .525 on-base percentage to go along with his 11 doubles, four home runs and 42 RBIs.

“Maddux also showed and proved you can be a multisport athlete and be very successful. Can’t wait to watch him compete at the next level,” said Ingersoll.

Madsen was an all-state quarterback at American Fork who passed for 10,834 career yards and 130 career touchdowns and has signed to play at Boise State. 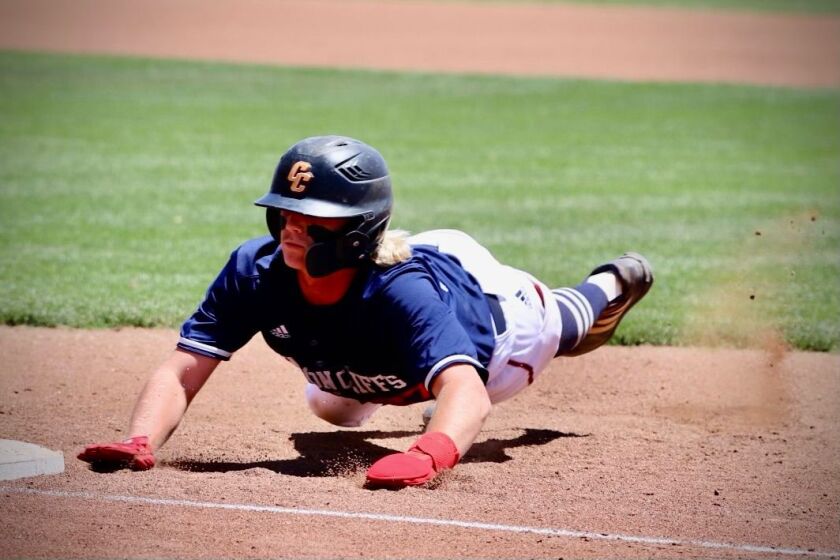 Crimson Cliffs’ Trey Evans is the Deseret News 4A Player of the Year.

4A Player of the Year

Crimson Cliffs sophomore Trey Evans was one of the best players in 4A all season, and then in the playoffs he raised his performance level even higher.

“Trey has an eminent love for the game of baseball. When he steps on the field he is ready to compete with his hard work ethic and great talent,” said Crimson Cliffs coach Justin Abbott.

For the season he finished with a .476 batting average with 16 doubles, seven home runs and 38 RBIs.

In Crimson Cliffs’ 5-0 showing in the playoffs he went 10 for 17 with four walks, 16 RBIs and seven extra-base hits.

“He’s been great in so many areas for our club all year. So consistent at the plate and always seems to be that guy that comes up big for us in crucial moments. Trey has a quiet confidence about him that can’t be taught. He just flat out completes,” said Abbott.

“A great young man like Trey doesn’t come around often. He’s an unbelievable teammate, great student, hard worker and we absolutely love Trey and the culture he has helped instill! Best part about it is that we get to do this for two more years.”

Evans recorded a base hit in every game but two this season, and reached based in every game as he was walked 16 addition times for a scintillating .573 on-base percentage.

Juan Diego’s Tyler Easter is the Deseret News 3A Player of the Year.

3A Player of the Year

Tyler Easter was the backstop for Juan Diego’s pitching staff this season and also the heart and soul of a team that ended the school’s 10-year state title drought.

He caught 139 innings this year for the Soaring Eagle, throwing out 18 runners and then finishing with a .980 fielding percentage.

Juan Diego coach Taylor Berg said Easter worked for everything he achieved on the field.

“Tyler is a special kid on and off the field. Being a multisport athlete, Tyler didn’t always get the same amount of offseason work as other kids, but that was never an excuse. He put in the extra work outside of normal practices to give himself the best chance to succeed, and he will be the first to tell you there was some struggle,” said Berg. “He worked and worked and turned himself into an outstanding baseball player.”

Easter was a team captain each of the past two years. In Juan Diego’s seven-game undefeated run to the state championship, he went 12 for 25 from the plate with five walks and 12 RBIs. 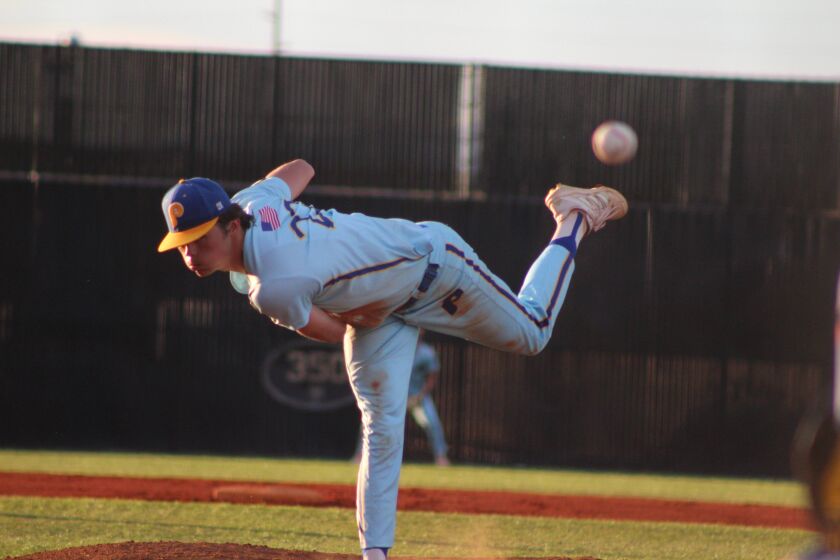 Parowan’s Shaydon Benson is the Deseret News 2A Player of the Year.

2A Player of the Year

Blessed with size and natural ability on the diamond, Parowan senior Shaydon Benson matched it with his work ethic and competitiveness all season as he elevated himself to the best player in 2A.

The Dixie State signee finished the season with a .530 batting average, a .604 on-base percentage and slugging percentage of .904 with his seven home runs and 33 RBIs.

The lefty was dynamite on the mound as well with a 2.44 ERA with 91 strikeouts and an opponent’s batting average of .119.

“When it comes to competition, Shaydo simply has the ‘it’ factor,” said Parowan coach Jed Townsend. “No situation in these big games is too big for Shaydo. He always rises to the occasion and competes at an elite level. During his entire senior season, he had pro scouts with radars watching him play. For a normal high school kid, this might be a little overwhelming. Not for Shaydon Benson.”

Even though Parowan came up short in the 2A championship games the past two years, Benson was instrumental in getting the program there each season.

In Parowan’s six state tournament games this season Benson went 12 for 21 with six walks and 12 RBIs. He also picked up the win in both of his starts on the mound.

Benson was also an all-state basketball player in the winter as he was named Deseret News third team.