When Luke Vazdauskas and his dad, David Vazdauskas, visited the Barbara Bush Children’s Hospital in Portland, Maine to deliver Christmas toys to its young patients, they never imagined that Luke would someday be receiving care from the very same hospital. Luke’s battle with Lymphoma has been demanding, but his family, friends and soccer teammates have created a resilient community of support and strength.

In October 2020, 16-year-old Luke underwent an MRI for knee pain. The results called for a bone marrow biopsy that led to a diagnosis of Lymphoma. Luckily, the cancer was caught early and confined to a small area in the bones of his legs, and is now in remission.

Before his diagnosis, Luke was an impressive member of Brunswick (ME) High School’s soccer team and was a starting varsity defender his freshman year. While he’s had to take a break from keeping the opposition at bay, he was still an integral member of the Brunswick Dragons last season. Luke analyzed game film, planned formations and, as an avid music producer, even organized the pregame playlist for his on-field teammates. The mutual comradery is apparent in the “Luke V Strong” bracelets and signage that adorned the team.

Luke’s chemo treatment is currently in the less intensive ‘maintenance’ cycle, his strength has returned and he’s looking forward to returning to a more active role on the team this fall. Throughout treatment, Luke and his dad have created a post-session tradition with BWW curbside orders. A 20-piece meal for the two to share is a staple in Luke’s healing process. As a sign of his return to health, Luke has even been kicking up the intensity as he increases the heat with different sauces.

“It was such an amazing surprise to get this soccer ball,” Luke said. “And even more amazing that it was designed just for me! It really gave a me a boost just when I needed it.” Luke adds that he looks forward to keeping up the weekly visits to BWW. “It got me through a tough time, and now it’ll be a nice reward after workouts and practices.”

When Luke’s dad reached out to share Luke’s story, resilience, and loyalty to BWW, a celebration was well-deserved. Now as Luke recovers, he’ll have a custom soccer ball to remember his strength and the support of his community. 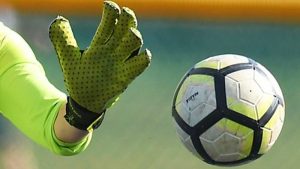