Former BYU All-America offensive lineman Brady Christensen learned a lot during his rookie season in the NFL with the Carolina Panthers, including just how difficult it is to block the league’s best defensive ends, and the importance of remaining even-keeled through all the ups and downs that all first-year players go through.

The third-round selection, No. 70 overall, in the 2021 NFL draft also found out how to decorate for the holidays, how to play multiple positions on the offensive line, and how not to complain when a veteran teammate spills a $200 shot of rare liquor and then unflinchingly orders another one at a rookie dinner.

As part of the initiation process that all rookies go through, Christensen picked up $5,000 of the eventual $7,000 tab, sixth-round pick Deonte Brown handling the rest.

“You just have to pay your dues. I don’t know if there was any initiation deal that was really crazy. All the rookies do it. I just went with the flow, did what I had to do, got accepted.” — Carolina Panthers offensive lineman Brady Christensen

“It was the most I had spent on any one thing in my life,” Christensen said. “It was a shock to the system. I was like, dang, you could almost buy a car for that much. That was eye-opening for sure.”

Actually, Christensen didn’t feel that badly about the cost. He had heard “horror stories” of first-round picks having to pay more than $20,000 for position group meals.

“Even though it sounds crazy, I feel like they took it easy on me, which was nice,” he said.

Among other rookie initiations, Christensen had to decorate the entire offensive line room for Halloween, Thanksgiving and Christmas, and if somebody decided it wasn’t good enough, he was fined.

He had to buy a coffee-making machine, even though he had never made the hot beverage, let alone drunk it, in his life. Before team flights, it was his job to pick up the food at multiple restaurants on his way to the airport.

“You just have to pay your dues,” he said. “I don’t know if there was any initiation deal that was really crazy. All the rookies do it. I just went with the flow, did what I had to do, got accepted.”

Christensen was one of five BYU players drafted in 2021, joining defensive back Chris Wilcox, receiver Dax Milne, defensive tackle Khyiris Tonga and, of course, quarterback Zach Wilson — taken with the No. 2 overall pick by the New York Jets.

The former Bountiful High three-sport athlete (football, basketball, baseball), who didn’t think he was good enough to play at BYU out of high school, let alone in the NFL, signed a four-year deal for $5.16 million a year ago this month after a three-year starting career for the Cougars.

After being Wilson’s blindside protector in 2020 when BYU went 11-1 and finished the season ranked No. 11 in the final AP Top 25, Christensen struck while the iron was hot and entered the draft with a season of college eligibility remaining.

Christensen, 25, BYU’s first consensus All-America football player since 2009 (tight end Dennis Pitta), said he has “no regrets” about leaving early, and why would he? Aside from making some good money, he played in 16 games for the Panthers in 2021-22, started in six, and generally drew praise from Carolina coaches for his work ethic, football IQ and willingness to improve.

He made his first start in Week 5, against the Philadelphia Eagles, as Matt Rhule’s team went 5-12 and finished well out of the playoffs.

“I had a lot of ups and downs throughout the season,” he said. “You kinda build that confidence each week as you get better and better. I think I finished the season well.”

Married in 2019, Christensen and his wife, Jordynn, welcomed baby boy Ledger into the family on March 16, 2021. A week later, Christensen performed well in BYU’s pro day, despite not having much sleep.

“Everyone was like, ‘Dude, it is that dad strength. Dad strength got you through it,’” he said. “I did better than expected, and I had some lofty goals.”

Having talked to 25 or 26 of the 32 teams in the NFL before the draft, he spent Day 2 of the draft at the home of his parents — Doug and Shauna — in Bountiful with family and friends and will never forget the phone call from the Panthers.

“I look back at that experience and I remember holding up Ledger and just cheering and stuff,” he said. “That was the best part of the night, for sure.”

Christensen moved to Charlotte for organized team activities last summer, while Jordynn and Ledger stayed in Utah, then joined him in the Queen City during preseason camp in August.

Christensen had told the Deseret News before the draft that his first major purchase would probably be a custom set of golf clubs, but he decided he loved his “old clubs” too much and thought, “Why do I need new golf clubs just because I can afford them now?”

Instead, he and Jordynn bought a Super 73 electric bicycle, which they share and use often to take Ledger on rides in a spacious park near their townhouse.

“That was just kind of a fun little purchase to celebrate it,” he said. “Nothing crazy.”

Making the team, still searching for a spot

Third-round picks almost always make the 53-man roster, but Christensen said he took nothing for granted. He never let himself celebrate until all the cuts had been made and he was still standing.

“I just take it day by day,” he said. “In the NFL, you never want to get too high, or too low, because you just never know what is going to happen next. That’s the mentality I had this last year, whether it was in fall camp or in the season. Just enjoy it while you have it.”

Christensen played his entire three-year career at left tackle for BYU, but bounced around a lot in Charlotte, going from right tackle to right guard to left guard, then back to right guard. He played left tackle the last three games of the season, and feels like he thrived there.

“I felt good about the second to last game, against the Saints,” he said. “They have an incredible D line. Obviously they have Cam Jordan on the outside and Marcus Davenport, another really good defensive end. I feel like I competed hard out there, and held my own, and had a couple good games to finish the season.”

In the season finale, against Tampa Bay, Christensen faced off against Vita Vea and Ndamukong Suh, and felt good about it.

“That gave me the feeling that, all right, I am here to stay. I am not going anywhere,” he said. “That really kinda boosted my confidence going through the offseason and going through this OTA session.”

What does the future hold?

Carolina coach Rhule recently said Christensen was having “a tremendous camp” and was in good physical shape. The question is whether the returned missionary (New Zealand) will play tackle or guard moving forward, especially after the Panthers drafted North Carolina State offensive tackle Ikem Ekwonu with the sixth overall pick last April.

In the sixth round, the Panthers took a guard, Tennessee’s Cade Mays.

“Will (Christensen) be a candidate at left tackle? He absolutely will, for sure,” new Carolina offensive line coach James Campen said last week. “But he’s a unique athlete. He can probably play all five (positions) if you really got right down to it. It is too early to tell.”

Welcome to the NFL, kid

Christensen grew up a big fan of quarterback Cam Newton, the 2010 Heisman Trophy winner, and even wore a “Cam Newton Superman” T-shirt under his pads in all his high school games. So when the Panthers signed Newton last November, Christensen was awestruck.

“To see him in the facility that first day, I was kind of a fanboy for a little bit, just seeing Cam Newton,” Christensen said. “And to be able to block for him and be on the same field as him, that was an incredible experience. It was fun to be able to rub shoulders with him and kind of pick his brain for a little bit.”

Christensen says that was one of his “welcome to the NFL moments,” along with playing in that game against the Saints at the Superdome. Drew Brees was another of his boyhood heroes, and he got to chat briefly with Saints QB Taysom Hill, the former BYU QB.

“I gave myself a second to just take it all in and I am like, man, I am here. I made it. Nothing big, but that’s the thing that sticks out the most.”

Christensen spoke to the Deseret News for 20 minutes from his townhouse in Charlotte, recounting the highs and lows from his first season in the NFL and what the future holds for him in the league. Here are some more of his comments:

On what his teammates ask him about playing for and attending BYU:

“They see my beard and say, ‘I thought BYU guys can’t have beards.’ I tell them it is true. I didn’t have a beard at BYU. They are just shocked that you can’t have a beard at BYU (unless you have a doctor’s note). And then they always ask if it is really as strict as they hear it is. That’s a tough question to answer. I tell them at BYU everyone is just trying their best to follow the rules, and no one is perfect.”

He said the honor code always comes up, along with the availability of alcohol.

“They ask if there is any alcohol in Provo. And I am like, ‘I think there is one bar in all of Provo. Maybe on Main Street there is that one bar. That’s it.’ And they are always shocked by that, that there is no alcohol at all on campus and that.”

On what he will remember about his rookie year 10 years from now:

“Just that I got to rub shoulders with guys like (running back) Christian McCaffrey and Cam Newton and (defensive end) Brian Burns — just some of the great players on the team for that rookie year, and to learn from them. That’s what I will remember the most.”

On whether he is a NASCAR fan yet:

“We went to the Coca Cola 600. It was incredible. I wasn’t a huge NASCAR fan before. I never really watched it. But after going to that race, I am definitely a NASCAR fan now. It was awesome. You can never prepare for how loud it is and how fast they go. It was an incredible experience to go, and we were close up to the pit, so it was cool. I would tell everyone you gotta experience it at least once, even if you are not a fan.”

If 15-month-old Ledger likes the games:

“Yeah, (Jordynn) came to all the home games except one, and brought Ledger as well, and he did pretty good. We got the noise-canceling headphones for him, and he took a couple naps during the games. … A couple weeks ago, we went to the FC Charlotte soccer game, and you could tell that Ledger recognized the stadium and stuff. He got excited.

“So I am excited to bring him this year and see how he reacts. I think he will have a better understanding that he is watching dad out there. So I think it will be fun.” 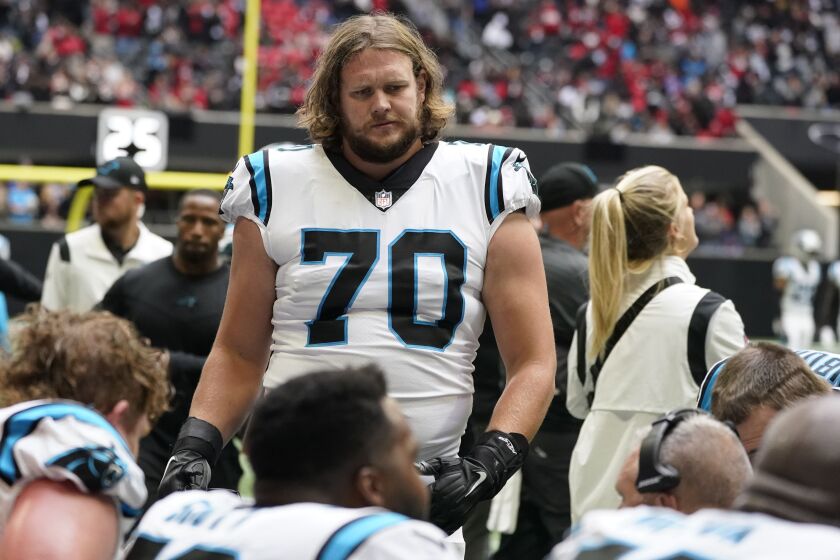 Carolina Panthers offensive tackle Brady Christensen (70) walks near the bench during game against the Atlanta Falcons Sunday, Oct. 31, 2021, in Atlanta. The bearded lineman often gets asked by teammates if it’s true he couldn’t have a beard during his playing days at BYU.