Ask Lone Peak senior golfer Berlin Long to name her favorite accomplishment in golf, and it takes her awhile. She’s that humble.

It is also a long list to sort through for the 18-year-old from Lehi, who has signed to play college golf for coach Carrie Roberts at BYU.

“I love golf so much, it’s hard to (single out) one thing,” said Long. “My whole family definitely loves it.”

Long shot an even-par 144 to win medalist honors at the 6A state girls golf tournament last week, and led the Knights to their fourth state title. It was the second individual championship for Long, who also won in 2020 when the UHSAA’s official state tournament was canceled due to the pandemic, but the PGA put one on at Fox Hollow.

“I was really debating between BYU and Virginia. If I was only going to a school just solely off golf, I probably would have chosen Virginia. But it was just so much more than that.” — BYU women’s golf signee Berlin Long

“Winning a state championship as a team is really special, it feels so important, so good,” she said. “So that one is up there. Winning with friends feels special.”

“So that is my low round ever,” she said. “That was super fun to go that low, and probably one of my favorite moments ever on a golf course.”

“She is under a lot of pressure, and a lot of it is self-imposed,” Farr said. “She’s a perfectionist. … She’s just a tremendous young woman.”

Lone Peak’s Berlin Long tees off as she and other girls compete in the 6A golf championship at Stonebridge Golf Club in West Valley City on Tuesday, May 10, 2022. Long shot an even-par 144 to claim medalist honors.

When BYU’s Roberts signed Long to a national letter of intent in November 2021, she knew she was getting a good one. Long had dozens of offers, and said she narrowed her choices to Virginia and BYU before choosing the Cougars.

“She is a very accomplished golfer with a long list of accolades,” Roberts said last November. “Berlin will not only add to our success on the course, but will continue to strengthen the culture of our team off the course as well.”

Among Long’s other golf accomplishments: three holes-in-one, an albatross (she made a 2 on the par-5 third hole at Glen Eagle GC in Syracuse) and a 6-under 67 to win that 2020 tournament in American Fork. Her aces came at Cedar Hills, Mountain Dell (Lake) and Talons Cove.

“I still don’t know if I am going to be that good,” she said, humbly, when asked how she got so good. “It is always a challenge. There is always room for improvement.”

Also, Long was the runner-up to future BYU teammate Lila Galea’i in the 2021 Utah Women’s Amateur and recorded five top-10 finishes during the 2020-21 AJGA season. Her sister, Aadyn, is a freshman at Lone Peak and also an accomplished golfer.

A Berlin is born

How did she get that unique first name? Long said her parents — Rob and Courtney — watched a movie when Courtney was pregnant with her in which the main character’s name was Berlin. Her mom liked the name. A few days later, her father was watching a football game in which the quarterback’s name was Brock Berlin and thought to himself, “That’s a cool name.”

“So my mom walked down the stairs and asked, ‘What do you think of the name Berlin?’ He was like, ‘I was literally just thinking the same thing.’ So they kinda thought it was meant to be.”

The Longs got a membership at Alpine Country Club when Berlin was 8, and she got more heavily into the sport as time went on, along with older brother Jaxon, now a member of the golf team at Southern Utah University.

“It has just taken off from there,” Berlin said. “I started playing tournaments when I was 10, and me and my sister (Aadyn) have been playing ever since.” 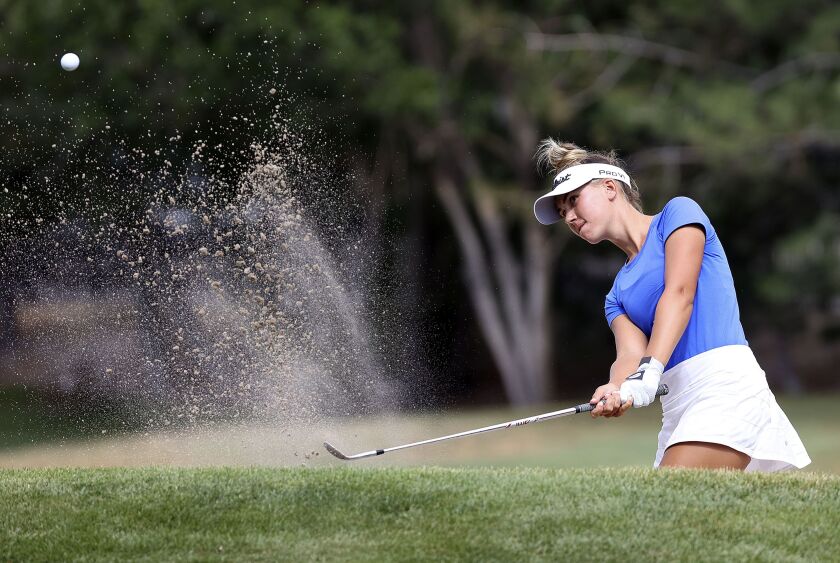 Berlin Long competes in the final round of the Utah Women’s State Amateur golf tournament at Oakridge Country Club in Farmington on Thursday, July 1, 2021.

Berlin said she plays in a tournament of some sort almost every day during the summer months, then practices at night for a couple hours.

The first person to give Berlin lessons approached her parents and told them she was really good and had a lot of potential. Rob Long, an accomplished golfer who plays in many Utah Golf Association (UGA) events, kind of scoffed at that notion at first, believing the pro said that to all the parents.

“Once I started playing competitively, I realized that if I wanted to, I could go far in this game, and it would take me places that I want to go,” Berlin said.

Former BYU golfer Clay Ogden, now a professional, became Berlin’s swing coach six years ago, and has help steer her to greatness, along with her parents.

“He’s been working with me for a while now, and he’s awesome,” Berlin said.

She decided to commit to BYU in October 2020, shortly after her junior year of high school started, ending what was shaping up to be a big recruiting battle.

“I was really debating between BYU and Virginia,” she said. “If I was only going to a school just solely off golf, I probably would have chosen Virginia. But it was just so much more than that.”

Berlin said her relationship with Roberts and BYU’s proximity to her home were key factors.

“Coach Roberts is so awesome. I haven’t been able to work with her as much as I will be able to, and I love her. I love her work ethic and how much she cares. I know she loves it, and really cares about all the girls and how they do as a team,” Berlin said.

She’s also good friends with a lot of BYU’s players.

“I am definitely a very social person,” she said. “So knowing my family is only 30 minutes away makes it a lot better than a couple thousand miles away. … Knowing what I am getting into was a really big deciding factor for me.”

Her dream foursome and favorite courses

Like a lot of youngsters, Berlin grew up idolizing Tiger Woods and says she would put him in her dream foursome, along with the late Arnold Palmer and Hall of Fame LPGA golfer Annika Sorenstam.

“I think I did a book reported on Annika’s book every year of school,” Berlin said. “She’s one of the greats, and everyone in golf appreciates what Tiger and Arnie did and have done for the game and how amazing they are.”

Berlin got to play Valhalla Golf Club in Kentucky last summer in the Girls Junior PGA Championship and lists that as the best and most beautiful course she’s played.

“Park City is kinda short and nothing special, but I have always loved that golf course,” she said. “Then there’s Alpine. That’s my home course. I really do love that course.”

Berlin said she’s trained hard and lifted weights in the winter to improve her length, and saw a noticeable difference during the high school golf season.

She would like to attempt to qualify for the Utah Men’s State Amateur this summer, as long as it doesn’t conflict with an already-crowded schedule. She won’t be able to play in the Women’s State Am, due to a conflict.

And she’s one of the best in this state to play it. 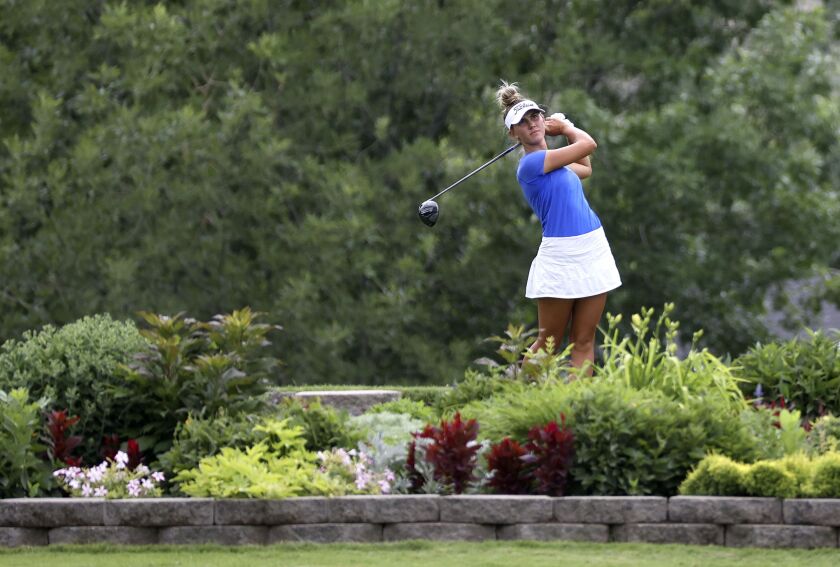 Berlin Long competes in the final round of the Utah Women’s State Amateur golf tournament at Oakridge Country Club in Farmington on Thursday, July 1, 2021. Lila Galea’i won on the 19th hole.

New LHAC Sections to begin in 2023